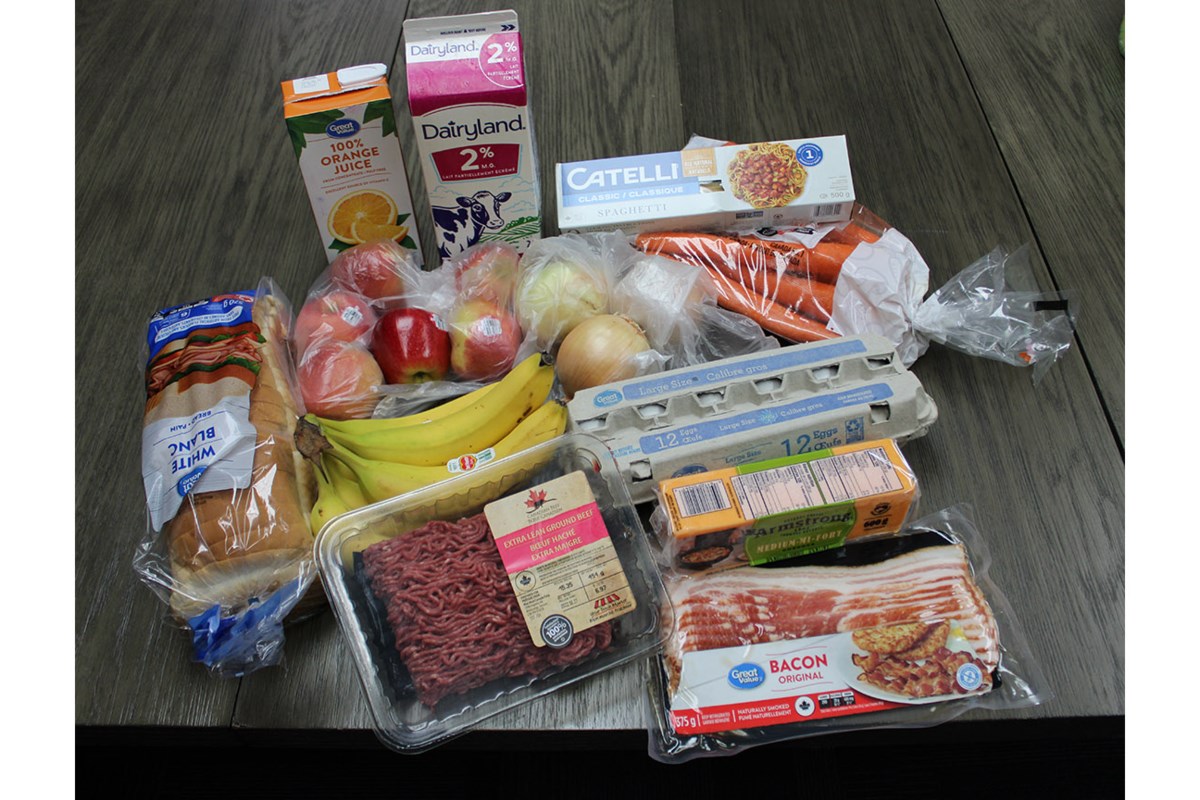 The Prince George Citizen decided to do another comparison shop to see what changed from June 8 to September 23 at the grocery store. You might be surprised at the result.

The Prince George Citizen decided to do another comparison shop on Friday to see which store has the best prices from Walmart, Costco, Save On Foods and the Real Canadian Superstore.

Arthur Williams did the first on June 8 and the staff thought we should rewatch to see what happened between then and now.

According to Statistics Canada’s Consumer Price Index, grocery prices in August rose at the fastest rate since 1981. Yikes!

Prices for food purchased from stores continued to rise in August (+10.8%), rising at the fastest pace since 1981 (+11.9%). Food supply continued to be affected by multiple factors, including severe weather conditions, rising input costs, Russia’s invasion of Ukraine and supply chain disruptions.

I followed in Arthur’s footsteps at Costco, Save On Foods (Spruceland location), Real Canadian Superstore and Walmart, which are the four major retail grocery stores in Prince George.

6 gala apples (Arthur chose the delicious red but there were none at the first store so I switched and all four stores had gala.)

My comparison shop took place on Friday, September 23 between 9:30 am and 12:30 pm and I followed the same rules as Arthur.

For each item, the cheapest option available on each store’s shelf was selected, including sale items, generic store brands and membership discounts. However, no member points were used to obtain free or discounted items.

Reusable bags were used to avoid being charged for plastic bags.

If the size or quantity specified in the listing was not available, the closest available size or quantity was chosen. This was particularly a factor at Costco, which specializes in bulk sales. To make it an apples to apples comparison, I’ve listed both the total price and the quantity-adjusted price.

After the comparison shop, The Citizen donated all the food to the Society of St. Vincent de Paul’s Downtown Welcome Center to help feed those in need in Prince George.

Journalist Arthur Williams did a price comparison on June 8 to find that the Real Canadian Superstore beat the rest by at least 42 cents with a total price of $50.10 for the 12-item list, Save On arrived at $50.52, Walmart was $51.65 and Costco for bulk items were $131.53 and reduced to reflect food quantities on the list, they came to $43.08.

I revisited the stores Arthur shopped at and bought the items he bought. This way we can all see what the cost difference is from now until now and which store currently has the lowest prices on 12 basic food items.

Who has the best deals?

I knew Walmart was in the running when the Giant Bin of Gala Apples went on sale for 97 cents a pound. This was a significant saving compared to other apples available at $2.49 to $2.99 ​​per pound in their produce department. But when trying to compare prices for bacon, which is quite expensive right now, know that Walmart and Save On had packs that weighed just 375 grams. I don’t know about you, but every slice counts in my household, so I was much happier to see the Real Canadian Superstore and Costco had the 500 gram packets.

Again, it was the apples which were on sale at $1.27 a pound that seemed to make the difference, along with their 375 gram package of bacon which was on sale from $7.49 to $5.49. I used my points card to get the offers but declined the offer to get any item for free but if you are at that point in your points and got something for free , this game would have been a slam dunk for Save On.

There are so many things to consider when deciding where to shop. Your location could be the deciding factor as gas is so expensive right now. But this is another story.

I was a little surprised to see that Superstore’s total was $55.22. That’s an $8.68 difference from Walmart and when Arthur went shopping in June his total came to $50.10, so Stats Canada is right about the food price increases. At Superstore, groceries increased by $5.11 from June 8 to September 23.

What happened to Superstore? I thought for sure they would dominate in the bargains. It seemed like everything was just a bit more expensive but not much. There is no deal for their gala apples which were $2.99 ​​a pound. Some of the other items were only pennies more and it added up. Superstore has many deals that reduce the price if you buy multiples of something. The white bread came in at $2.99 ​​for one loaf, but if I got two they were $2.50. So it’s a way to save money and at least you know this option exists.

Costco sells almost everything in bulk, so the cost of all 12 items was $142.13, and when reduced to equal the amount of food from the other store, it was $49.33. When Arthur shopped in June, his total was $131.53 and $43.08 after doing the math to match the quantities to the rest of the stores. And here we are again with a significant increase of $10.60 from June 8 to September 23 and a difference of $6.25 when you reduce it to the comparative purchase amounts of other stores.

I was relieved to be able to get six bananas for $1.99, so that’s one less math I had to do to come up with a price for the items when I narrow them down to comparisons with the other stores.

I had to buy twice as much milk, cheese and apples as on the list; 2.5 times more eggs and about the same for onions; three times as much bacon, bread and about as much for carrots; about 3.75 times more orange juice; 5.5 times more beef; and a whopping 8x more spaghetti – glad it has a long shelf life.

So the question is, does buying in bulk really mean good business?

Not all the time. So I guess that’s when the buyer beware warnings come in for the buyer. Be careful when choosing and be sure to choose carefully – remember the $10 Costco bacon pack – ouch!. On the other hand, there was plenty of spaghetti at Costco, which came in at $1.11 per 500 gram pack, compared to $1.99 for the next best price at Superstore. Good luck while you’re grocery shopping and it might be worth taking a minute to do the math on the prices of some of these items versus the sizes to stretch that dollar as fast as possible.

This test compared the prices of a limited number of items, all purchased in a single day, and may not reflect broader price trends at each respective store. Grocery prices change regularly and sales or other promotions may affect results.

The Citizen is not able to measure the quality, taste or nutritional value of the food purchased. The differences in these qualities may explain the price differences.

This story was made with detailed notes from Arthur Williams’ June 8 story which you can read here https://www.princegeorgecitizen.com/local-news/which-store-in-prince-george-has-the-cheapest-groceries-5454567.

For more details on the Consumer Price Index, visit Statistics Canada at https://www150.statcan.gc.ca/n1/daily-quotidien/220920/dq220920a-eng.htm.