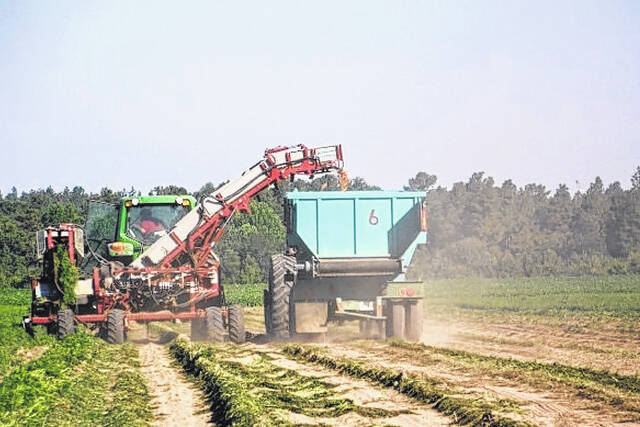 The national celebration of “Farm City Week” takes place each November, traditionally beginning on the Friday before Thanksgiving. The event began with a joint resolution of Congress in August 1957, in response to a proclamation by President Dwight Eisenhower to recognize the contributions of farms to rural and urban communities. As communities across the country recognize Farm City Week in different ways, even at different times of the year, the goal is to focus appreciation and thanks for the contribution of agriculture to our way of life. .

According to Farm Bureau, there are 2 million farms across America, 98% of which are family farms, owned by individuals, family companies and partnerships. 86% of American agricultural products are produced on family farms or ranches. Surprisingly, after factoring in the costs of inputs – such as fertilizer, equipment, labor, etc. – farmers and ranchers receive only 8 cents for every dollar spent on food by the American consumer. The remaining 92 cents goes to non-farm costs such as processing, marketing, transportation and distribution. Consider, for example, that a bushel of corn, which weighs 56 pounds, is worth $ 5.74 to the farmer who grew it. Meanwhile, a box of Corn Flakes, weighing 24 oz, costs $ 3.64. Farmers and ranchers make up only 2% of the U.S. population, and 25% are entry-level farmers (defined as having less than 10 years of farming), with an average age of 46, while, according to the census of USDA Agriculture 2017, 34% are 65 and over. According to Carolina Farm Credit, North Carolina agriculture employs more than two million workers throughout the supply chain, from farmers and ranchers to shippers, processors, traders, retailers, and more. The annual economic impact of this complex network is more than $ 424.9 billion for the economy of North Carolina.

Farmers face many challenges as they strive to feed, clothe and house the world. The National Oceanic and Atmospheric Administration (NOAA) has declared “July 2021 the hottest month in the world” in 142 years of record keeping. The record-breaking heat wave impacted fruit crops such as cherries and blackberries in Washington state and elsewhere. A record drought in the Midwest has resulted in a decline in livestock, including future breeders, which will likely lead to high beef prices in the near future. Feed prices are higher than usual, which is good for farmers who grow corn, wheat and soybeans, but tough for meat producers who depend on these crops to feed their animals, increasing their production costs considerably (and which will ultimately be passed on to the consumer).

These challenges follow the 18-month-long pandemic, which has caused widespread disruption in the agriculture industry. With the closure of restaurants, one of the main buyers of agricultural products was shut down (54% of Americans’ food spending is on food consumed outside). Labor shortages, lack of transportation (shortage of truckers) and the substantial increase in inputs such as fertilizer have all created huge challenges for farmers.

Farmers have always faced daunting challenges, such as extreme weather events, pest outbreaks and other unforeseeable hardships and tribulations. It is the nature of the profession. However, the challenges have been particularly difficult in recent years, but we continue to enjoy the safest, strongest and most diverse food supply in the world. Not to mention, the cheapest. During Farm Town Week, this is our chance to show special appreciation and gratitude to farmers, especially those we know in our own community. One of the highlights of Farm City Week in Richmond County is the Ellerbe Farmers Day Parade, which this year takes place on Saturday, November 20 at 11 a.m. in downtown Ellerbe. A true old-fashioned parade, with floats, tractors, horses, fire trucks and of course Santa Claus bringing up the rear, the Ellerbe Farmers Day Parade is an annual favorite. The Farmer Appreciation Luncheon, bringing together farmers and business leaders, city and county officials, will be held at Camp Millstone on Monday, November 22, from 12 p.m. to 1 p.m.

Each year, Farm City Week celebrates the mutually supportive relationship between rural and urban communities. Each year we take the opportunity to express our appreciation for the hard work of the farmers so that we can have a generous Thanksgiving. This year’s motto for Richmond County Farm City Week is simple. It is, from the bottom of my heart: thank you, farmer.

Paige Burns Clark is the Director of the Richmond County Cooperative Extension and the Horticultural Officer.