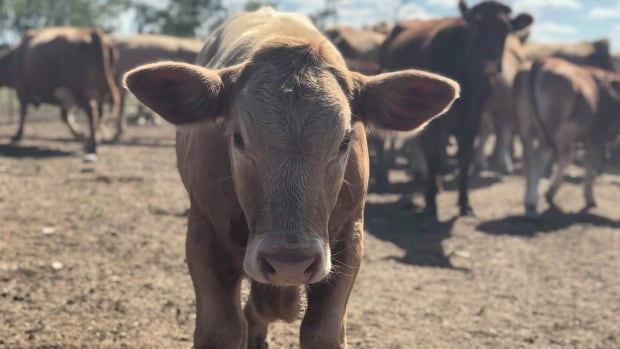 Drought and feed shortages plagued by drought, the past few months have been trying for many prairie ranchers.

Now, as fall approaches and people take stock, tough decisions loom as ranchers weigh how much livestock they will keep through the winter amid rising costs.

â€œI know we’re probably looking at wiping out about a third of our herd just because we can’t find enough forage for the winter,â€ said Melanie Wowk, who owns about 300 cattle on a ranch in North East. Alberta.

She said feed costs had fallen from three cents to 12 cents a pound over the past four months, noting that the price of barley had also “skyrocketed” and supplies of straw were scarce.

Although parts of the Prairies have received recent rain, pastures are still showing the effects of hot and dry summer.

â€œIt’s tough,â€ said Wowk, who is also a veterinarian and president of the Alberta Beef Producers. “It’s a tough decision.”

Many ranchers in the Prairie provinces will face similar decisions in the coming months.

â€œI hear everything from people slaughtering a third of the herd to not slaughtering anything until bankruptcy,â€ said Bob Lowe, president of the Canadian Cattlemen’s Association (CCA). “So it’s everywhere.”

Still, the hope is that earlier fears of a dramatic reduction in the size of the Canadian cow herd as a whole will not materialize, in part thanks to late summer rains in some areas and to agricultural revival.

Analyst Brian Perillat expects the Canadian cow herd to decline “moderately” this year due to the drought, but not the double-digit percentages feared in early summer.

“We were in the midst of the extreme stress of drought, [but] maybe it went a little better than we expected, â€said Perillat, of Canfax, a division of the Canadian Cattlemen’s Association that tracks market data.

Ranchers believe the coming months will give them a clearer picture, but a much smaller herd would likely put upward pressure on the prices consumers pay if that translates into a tightening of beef supplies. Herds can take years to rebuild.

The August rain is a “godsend” for some

In Manitoba, Tyler Fulton said the rain in parts of the province last month was a â€œgodsendâ€ for some.

“The difference it made was that it allowed producers to keep these cows on the grass, â€said Fulton, breeder and president of Manitoba Beef Producers.

“The way things were going, they were going to have to remove the animals probably two or three months earlier than normal.”

But as the rain saved some ranchers a few months, Fulton said she had not addressed the winter feeding situation. “The problem was, there was such a massive deficit in hay production.”

The federal-provincial farm stimulus program is there to help ranchers cover some of their winter feeding costs, Fulton said.

“It moves the needle on whether or not they can afford to keep these animals,” he said.

“But there is stillâ€¦ a question as to whether there is enough forage, and especially forage, for everyone. I am optimistic that will happen. But we’ll have to wait and see.“

Fulton believes they will have a clearer idea of â€‹â€‹the impact on the Manitoba herd by mid-December.

â€œI don’t look like it, but I’m actually optimistic about the long-term potential of the industry,â€ he said. “I really think from a demand perspectiveâ€¦ we’re very well established. “

Lowe of the CCA said that with rising demand globally, the outlook for livestock prices is “nothing more than an increase.”

“We have to be able to hang on to them and keep them for it to really make a difference,” he said.