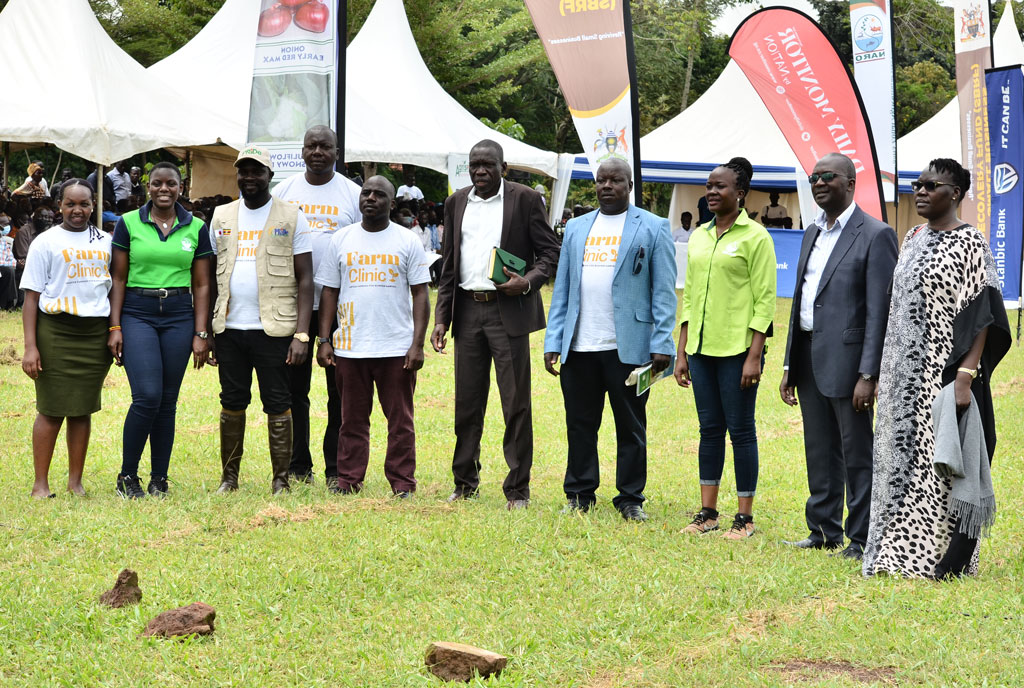 Hunger is increasing, poverty too. This situation is aggravated by unpredictable climatic changes which significantly affect agricultural production. The outlook is really bleak. But researchers say help from farmers is on the way.

During the Seeds of Gold Farm clinic at Ngetta Zonal Agricultural Research and Development Institute (Ngetta Zardi) in Lira District, Naro Deputy Director General, Agricultural Technology Promotion, Dr. Sadick Kassim told hundreds of farmers at the penultimate event of the year that using approved methods is the way to profit from farming.

“Our vision is to have a competitive society supported by a vibrant agricultural system,” says Dr Kassim.
He explains that the agricultural seasons are changing from two to one, which requires irrigation to fill the gap left by the drought.

“We have to adapt to the situation,” he says, referring to Zimbabwe which has only one season but is more food secure than Uganda.

He says farmers should adopt research technologies to be able to harvest enough food and handle it well after harvest.

He adds that drought-prone northern Uganda has low productivity of major crops, including cereals, cassava and potatoes.

“Climate change is also likely to increase disease in key crops, which could be devastating in the event of crop failure or livestock mortality,” says Dr Turyagyenda.
He urged farmers to adapt to improve grain storage, which can help minimize losses and avoid food insecurity.

Participants move from station to station every hour so they all have the opportunity to learn something new. And for the last half hour, they ask all the questions.

Howard Kasigwa, a fish farmer, one of the few left in the country after the death of Dr. Matthew Tenywa Mwanja, spoke about the right way to raise fish in ponds. Farmers were enthusiastic about response feeding, a technique he says helps save food.

“A farmer first pours a handful of food into the pond to gauge the food mood of the fish,” he says.
Participants also heard about pond fertilization as an essential part of profitable fish farming. Agricultural technicians taught farmers the role of clean seeds.

Angella Kyobutungi, who taught cassava production, says clean seeds are as important as the harvest itself.

A financial bridge
Regarding the financing challenges faced by farmers across the country, Farm Clinic’s financial partners, Bank of Uganda and Stanbic Bank, offered the affordable solutions available.

Joseph Mutaka, Senior Banking Manager, Bank of Uganda, said the Agricultural Credit Facility (ACF) opens up access to credit in areas where communal land tenure and smallholder farmers are otherwise excluded due to a lack of collateral for get credit.

The ACF is administered by the Bank of Uganda with participating institutions. Small farmers get loans of up to 20 million shillings.

“With the interest rate set at 12% per annum, farmers have the freedom to cultivate without any fear,” says Mutaka.

Stanbic Bank was declared the best performing commercial bank in the dissemination of government-funded ACF loans in 2019. Yet it continues to provide agriculture-friendly loans.

Mpaka explains that agri-finance loans targeting both large and smallholders can ease the burden on agriculture. She says projects such as cattle breeding, commodity trading, all forms of agriculture, acquisition of machinery, establishment of factories and value addition, among others, are supported by the loans. of agricultural financing from the bank.

To reach the informal market, Mpaka says the bank has set up a digital wallet called FlexiPay to reach farmers.

Other challenges faced by farmers, such as the lack of pensionable jobs, are included in the NSSF voluntary membership scheme. This plan offers employers and workers such as farmers not constrained by NSSF law the opportunity to voluntarily save for their retirement.

Advantages
Tom Okello, a cage fish farmer, says he depends on extension information to help him succeed. He visited the Farm Clinic to learn more about maximizing the benefits of caged fish farming.

“I’ve always tried everything they teach. I attend these days in order to learn more about new techniques and also to be able to get in touch with other farmers. I trust the information from Naro’s experts because their specialists have already done the research and I have benefited from the information they provided,” he says.