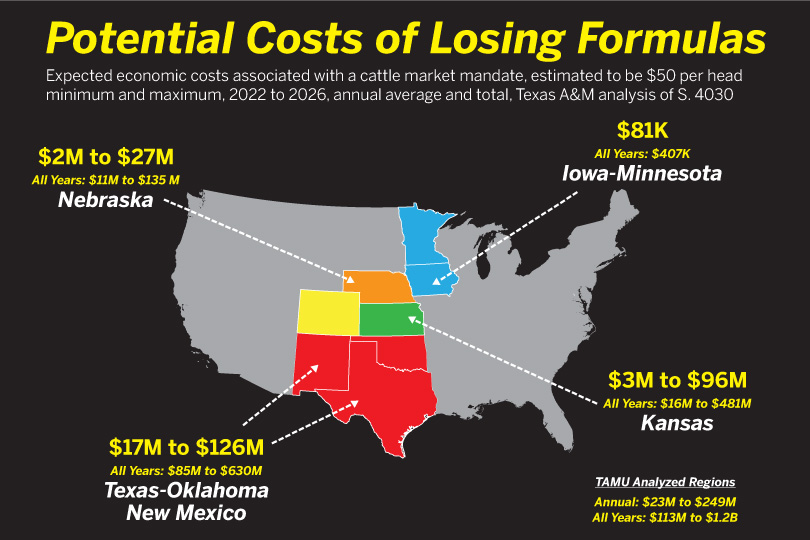 The AFBF Board of Directors voted on the following policy position regarding the Livestock Price Discovery and Transparency Act:

“The American Farm Bureau Federation (AFBF) will continue to remain committed to the Livestock Price Discovery and Transparency Act, but with strong opposition to the mandatory minimum negotiated trade provision.”

TFB is committed to finding solutions to increase price transparency and discovery for livestock producers. However, it is important to ensure that legislation is well thought out before being enacted. Failure to do so can harm the very producers it is meant to help.

Detailed reports on the US cattle market, including information on supply chain disruptions, do not indicate that cash trading is an effective solution. Below are links to published reports.

The mandatory cash trade would cost ranchers between $23 million and $249 million a year, depending on where the agriculture secretary sets the mandate over the five years, according to data analyzed by the Center for Agriculture and Food Policy. . Approximately 90% of the total costs will be shared by cattle producers in Texas, Kansas, Oklahoma and New Mexico.

Losses for the Texas region will range from $17 million to $126 million per year.

The Livestock Markets Task Force was made up of 10 state agricultural bureau presidents – Arizona, Iowa, Kansas, Kentucky, Mississippi, Montana, Nebraska, New York and Texas, as well as the vice president of the AFBF of South Dakota.

“Additional regulation may not resolve the issues as intended and could potentially have negative consequences. A key point to remember when considering the optimal level of trades being traded is that price discovery is not the same as price discovery. While better price discovery is a good thing, it doesn’t necessarily mean it will translate into higher prices (as many proponents of minimum thresholds claim). Mandatory minimum negotiated trade could potentially inhibit a producer’s ability to enter into AMAs, which are typically a premium paid above market value.
See the report.

Published by seven experts in extension, agro-industry and livestock marketing.

“There is no research evidence of a significant or ongoing problem with feeder cattle price discovery at this time. This bill attempts to fix a problem that does not exist. As such, this legislation provides no benefit to feeder cattle markets and imposes many millions of dollars in additional costs, additional risk and loss of value.The exact cost will depend on the details of implementation, but the cost is at least hundreds of millions of dollars, which will lead to lower feeder cattle prices and higher consumer beef prices.
View comments.

Analysis of S. 3229 – Livestock Price Discovery and Transparency Act of 2021

Published by economists at the Center for Agriculture and Food Policy.

“Trade-traded mandates provide additional price discovery and market transparency. However, greater price discovery does not mean that cattle prices would be higher. It is worth explicitly pointing out the economic trade-offs that this part of S. 3229 creates. The bill increases price discovery, but at the cost of lower prices for cattle producers and higher prices for beef consumers. There is no evidence that increasing price discovery would increase livestock prices.
See the report.

The Agricultural and Food Policy Center released this report at the request of the US House Committee on Agriculture in 2020.

“Thus, one potential result is that policies aimed at increasing traded spot exchanges and thus reducing AMAs could have the unintended consequence of reducing the overall economic surpluses currently being realized in the fed cattle and beef sector.”
See the report.

“Imposing negotiated spot trade levels would not have changed the supply-demand imbalance and market impacts on packer prices and margins in 2020.–21 period. Neither warrants nor improved price discovery would change the fact that there was more livestock than could be slaughtered, manufactured and further processed.”
See the report.

“Formulas are alternatives to the cash market that are innovations and improvements that have benefited the entire industry – and not without cost, but the costs seem minimal. The risks associated with rejecting these innovations seem significant In short, the potential costs of mandates are many and high while the benefits are few and negligible. Nor are the benefits likely to be achievable – or executable – without huge changes. Rather, an objective assessment of mandates results in a–conclusion aside. It is a conclusion reached when an evaluation of existing research is undertaken, when a position is established on the basis of facts and science, and when considered on the basis of the economics of livestock markets and beef.
See the report.

Analysis of the Livestock Price Discovery and Transparency Act 2021

“The decline in value due to the loss of AMA over the five-year period ending in 2020 would have averaged approximately $6 million per year for the State of Arkansas.”