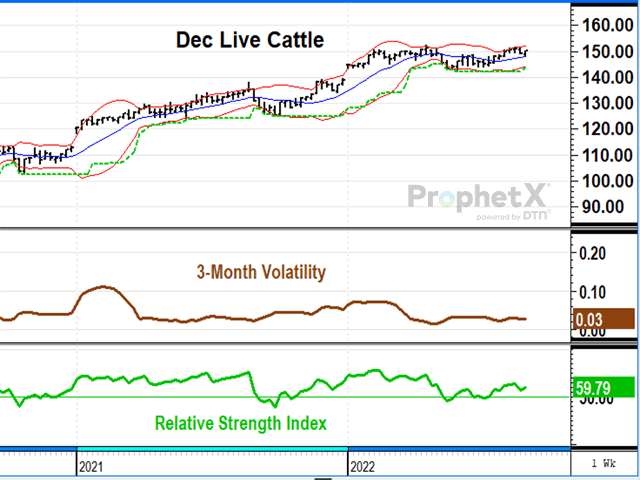 December live cattle finished up $1.15 at $150.25 for the week ended Friday, Sept. 2, closing in on its contract high at $152.37, even though prices for dressed cattle in the North were estimated to be $4 lower per DTN. Parts of Texas showed improved soil moisture last week, but the liquidation of the beef cow herd remains a long-term bullish factor for cattle prices. In mid-December, December cattle prices fell below their three-month low, a third failed attempt to sell in three years. Three-month price volatility has been unusually low since late March, while prices have held sideways, largely ignoring concerns in the external market over rising interest rates and talk of recession. Technically speaking, December Cattle prices have been trading above the 100-day average since late July and the weekly Relative Strength Index of 59.8 indicates that the path of least resistance remains higher.

November feeder cattle rebounded from a weaker start to the week and ended at $186.25 on Friday, a gain of $1.07 on the week. November feed prices are down from their high of $191.42 in mid-August as doubts grow over this year’s U.S. corn yield, but feed prices held steady at above their 100-day average since July 11 and survived a test of their one-month low on Monday. . Compared to live cattle, feeder cattle suffered more losses in April and May, but have been trading higher since May 20 and have shown slightly higher volatility as prices rise, a potentially bullish higher prices ahead. With November feeder cattle prices not far off their contract highs and the relative strength index showing more progress on up days than down days, the trend remains up with support key at $182.00.