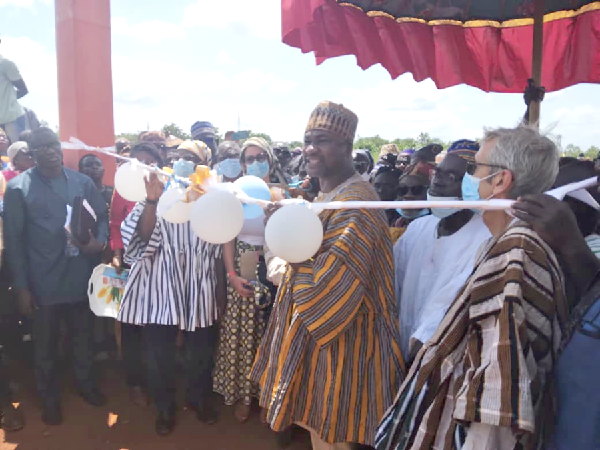 Mr. Hardi Tuferu (2nd from right), Deputy Minister of Food and Agriculture in charge of livestock, cutting the ribbon for the inauguration of the market â€¢ Insert: entrance to the Gushegu livestock market

The livestock market to improve livestock mobility and trade in the Eastern Corridor area of â€‹â€‹the North region and throughout the West African sub-region was inaugurated in Gushegu.

Known as the Gushegu Cattle Market located in the Gushegu Municipality of the Northern Region, it also aims to boost the production of quality livestock and create jobs along the entire livestock value chain. .

The market, which was reportedly constructed at an estimated cost of around GH Â¢ 600,000, was made possible through collaboration between the Ghana Development Communities Association (GDCA), a non-governmental organization (NGO) and the Municipal Assembly of Gushegu .

It was funded by Acting for Life (AFL), France, the European Union (EU) and the French Development Agency (AFD), with the objective of supporting the mobility of livestock for better access to resources and markets in Ghana and West Africa in general.

The market which was made operational in April of last year but could not be officially opened during this period due to the COVID-19 pandemic until last Tuesday, is also said to have helped to significantly improve the Fund generated in internal assembly (FGI) and boosted the local economy.

The market was jointly inaugurated by the Deputy Minister of Food and Agriculture in charge of Livestock, Mr. Hardi Tuferu, the Gushe-Naa (Supreme Chief of Gushegu), Naa Abdulai Mahamudu Shitobu I and the AFL Project Manager for Ghana, Ms. Annabelle Powell.

Speaking at the inauguration held at the market, Mr. Tuferu, who is also a Member of Parliament for Nanton in the North region, said the project was in line with the will of the government.
Livestock for Food and Employment Program (RFJ) which aims to develop a competitive and efficient livestock industry to increase production, reduce meat imports and create jobs along the value chain livestock and poultry.

He said trade between countries in the sub-region would generate more than $ 73.5 million per year from livestock and grains and create more than 20 million jobs.

Mr. Tuferu called on development partners to help the government establish a modern slaughterhouse with cold storage and transport facilities in the northern sector of the country.

He said that with the creation of such a facility, the animals would be slaughtered, stored, well packaged and transported in appropriate vehicles to various markets across the country.

GDCA Board Chairman Dr Osaman Al-Hassan praised the collaboration among all partners that brought the project to fruition, saying it will improve the livestock trade in the sub-region and serve catalyst for stakeholders to work together in harmony to stimulate agropastoralism, as well as improve environmental management.

AFL Executive Director Bertrand Lebel also congratulated all project partners for working hard to ensure the success of the project which aimed to develop mobility and livestock trade in the sub-region.

Other project partners, including the Economic Community of West African States (ECOWAS), in a message of solidarity, said the project would boost the local economy, strengthen integration between Ghana and its neighboring countries and would help reduce conflicts between pastoralists and local populations. Farmers.