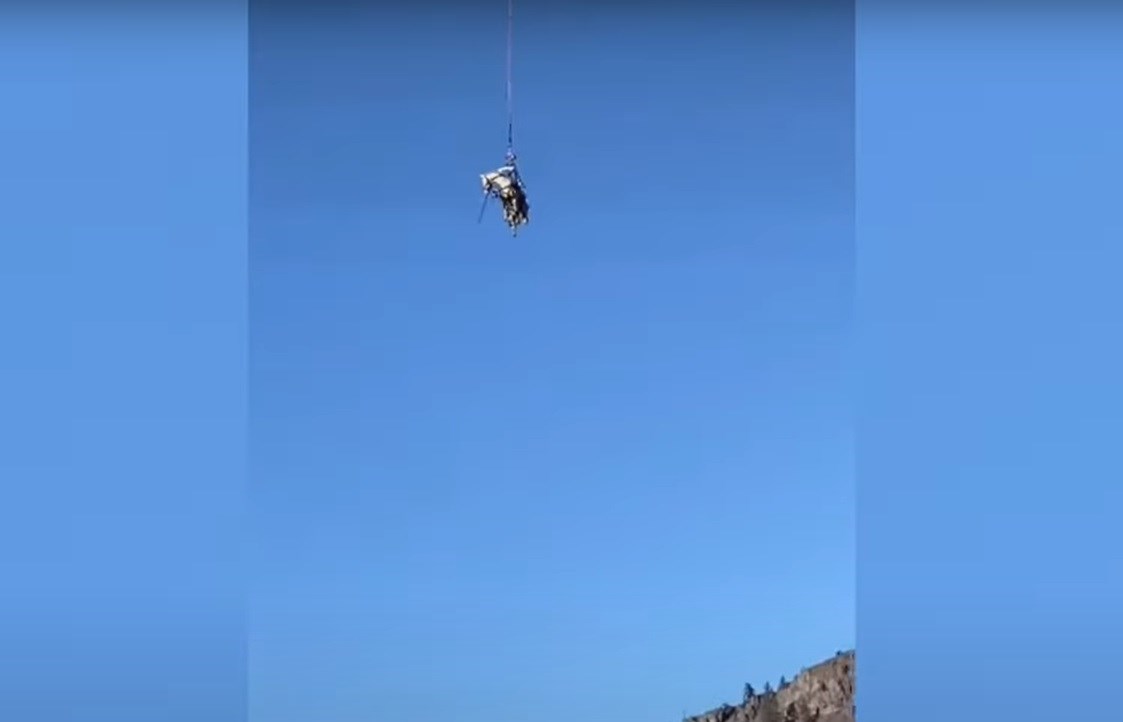 A specialized harness, large feeding bag and cargo net were used in the rescues, which are going viral on social media.

A Kamloops rancher who orchestrated an elaborate helicopter rescue last week for three horses, a pregnant cow and three stranded goats near Spences Bridge says she had no other choice.

The operation is believed to have been the first helicopter rescue of cattle in Western Canada.

Kelly Kennedy of Sageview Rescue Center is also a director of Horse Council BC. She said she became aware of a handful of horses stranded last week on a property along Highway 8 near the Spences Bridge.

“These three horses were stranded on a small stretch of road – that was all that was left,” she said.

“We didn’t have a lot of time because they had been there for five days without food. And the owner was giving them snow that he was trying to melt. So I just decided, ‘Well, why can’t we use a helicopter?’ “

Kennedy said she found a helicopter company at the Kamloops airport willing to participate and obtained the use of a specialized harness that she said would work to keep the animals to safety.

On Friday morning, harness in hand, Kennedy took his son and his friend to rescue the animals. Only one of the horses was large enough for the harness, Kennedy said. The other two were airlifted in a large feed bag and cargo net.

The next day, Kennedy and the helicopter pilot returned to rescue a pregnant cow and three goats from another nearby property.

“We just put the big net on the ground, the cargo net from the helicopter, and the cow walked right into it,” she said.

“He just went and took it off. She just lay in the net, and he freed her, lowered her to the ground in the field [in Spences Bridge], and the whole town is there, and she just appeared.

Kennedy said she did not yet know how much the rescue efforts were costing. She said Horse Council BC has a disaster fund that should cover it – but it could be dry now.

“I haven’t heard yet and I’m really scared to ask,” she said.

Images of the rescues are going viral on TikTok, Kennedy said, boosting some donations. She encouraged anyone who wants to help donate money to Horse Council BC’s disaster relief fund.

“We are collecting donations, which makes me feel good because I really refueled this time,” she said.

“In one day, I used up everything. But what are you going to do? There was no other way to get them out than to fly them. … If we hadn’t tried, the horses would have been slaughtered. There was no other alternative, and we couldn’t let them starve there. “