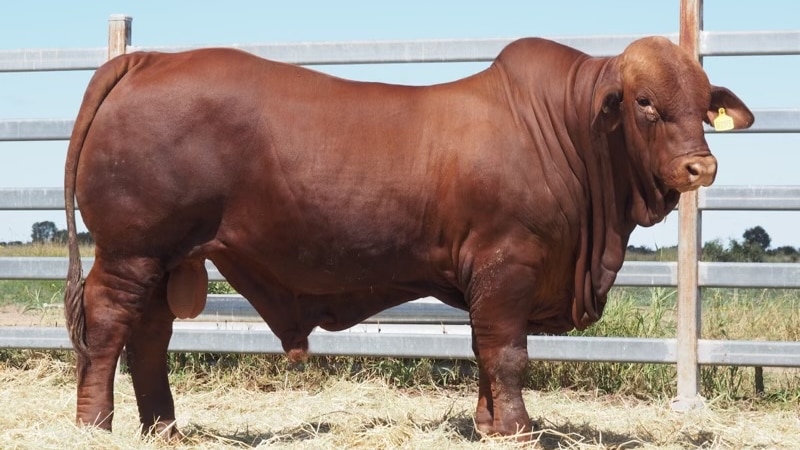 A Droughtmaster bull broke the world record for the breed at the Central Queensland Livestock Exchange in Gracemere, selling for $220,000.

Adam and Shelley Geddes at Oasis Droughtmasters, about 50km north of Dingo, sold bull ‘Oasis A Long John’ to Rondel Droughtmasters on Wednesday at the 2022 Droughtmaster National Sale.

Mr Geddes said his family were delighted with the sale, and that it still hadn’t “sinked”.

“I still can’t believe it. We put a lot of time and effort into it. It’s nice to be rewarded for it,” Mr Geddes said.

“You dream about these things, you never think it will happen.”

Mr Geddes said there had been some interest in the bull in recent months.

“He almost stayed home, but we’re starting to build a house, that’s why he ended up coming… but we got him back.

“We’re going to do some AI (artificial insemination) programs with him, and we have his mum and dad still there, so we’ll probably do something there too.

“We will try to raise another one. That would be good.”

The sale breaks the previous breed record of $180,000 set by Glenlands Droughtmasters sire Glenlands Prince in 2012.

Anthony Ball, a stud stock auctioneer for Elders Queensland, sold the bull and said it needed a “special kind of bull” to break the record.

“Records are there to be broken. They may be broken one day, but those kinds of days just don’t happen too often,” he said.

“I’m so happy, and it couldn’t have gone to nicer people. They were rewarded for [their] dedication.”

As for the bull, Mr Ball said he “has got it all”.

“The Oasis type, it all starts with a really good strong head. He’s got this nice eye hood. He’s tall, fleshy, with a good side and skin that waves all the way down to the hock over there – beautifully balanced .

“When he got up, it didn’t matter where you were sitting in the ring; he was just amazing from every angle, just a real dad in every sense of the word.”

He said it was wonderful to see the record broken in the year the breed turns 60.

“It only raises the profile of the Beef Capital and certainly the Droughtmaster breed.”

Mr Ball said the sale also showed how well the industry was doing.

“I know the Geddes family, 12-18 months ago, was pumping water and had no blade of grass, and the dams were empty, and they made it tough.”

Mr Geddes said he had spent the “last two years” hauling water and getting help from neighbours.

“We were doing poly [pipe] just to keep all the cows alive and some nights you’re there till midnight hauling water but it’s worth it on days like this.”

Mr Geddes said the rain of the past few months had changed things.

“It’s beautiful there. The dams are full, there’s plenty of food and the cows are fat,” he said.

“The rain doesn’t seem to stop now. I’ve been praying for it every night for three years, and now it keeps falling, which is good.

“The country is doing well and cattle prices are doing well, so you can’t complain about being in the industry right now.”

Local news straight to your inbox

ABC Capricornia will deliver a roundup of the week’s news, stories and photos every Friday. register here