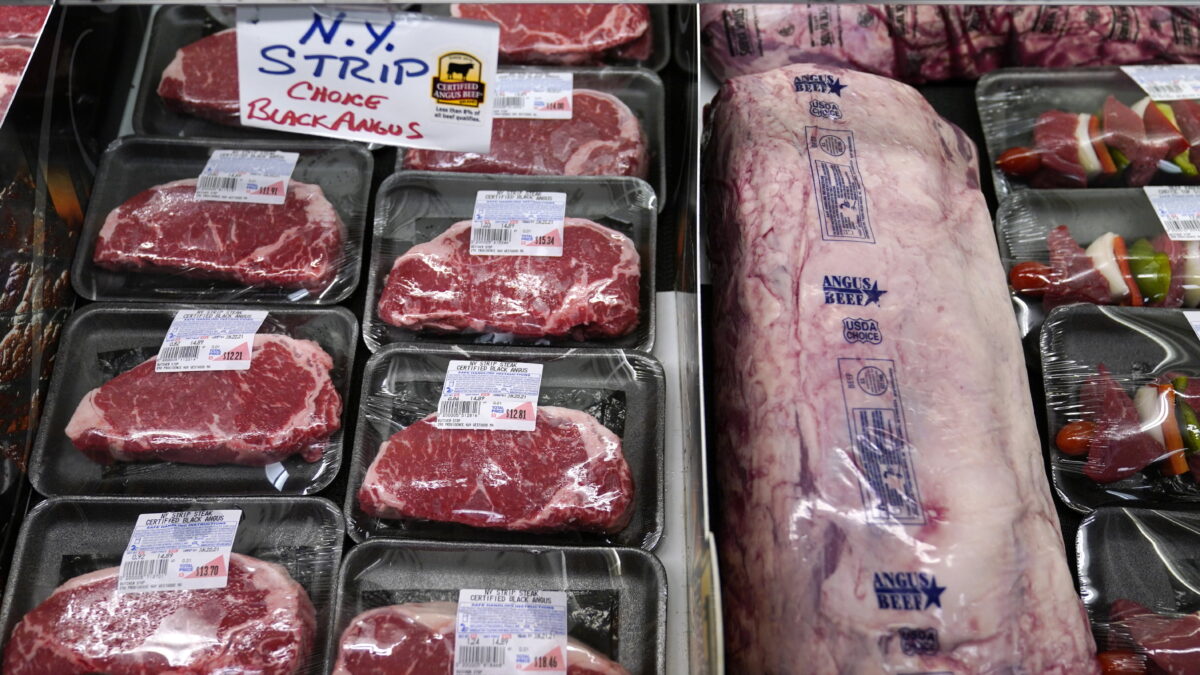 Consumers can expect to pay more for beef at the supermarket as prices are expected to rise by 2023 due to rising feed costs and intensifying drought conditions in key producing areas , resulting in tighter supply.

In August, beef and veal prices climbed 2.5% year over year, according to the Bureau of Labor Statistics (BLS). Within this category, uncooked ground beef and uncooked roast beef jumped at an annualized rate of 7.8% and 3.3%, respectively. Steak prices are down 3% from a year ago.

Year-to-date, live cattle futures have risen more than 5% to $1.47 a pound on the Chicago Mercantile Exchange (CME). Prices are expected to post a gain of around 10% in the third quarter.

Despite rising expectations of lower beef prices as demand growth slows due to recession fears and changing consumer behavior at the table, some industry experts believe there is more room for growth. In fact, companies and buyers can expect to spend more on beef, says Jayson Lusk, agribusiness economist and professor in the Department of Agricultural Economics at Purdue University.

Cow and heifer slaughter rates have been robust this year. With Southern Plains slaughter numbers up about 30% year-to-date compared to 2021, beef production has been impressive in 2022. U.S. Department of Agriculture data (USDA) show that more beef cows were slaughtered in July than in any other month since records began in 1986.

In some cases, farmers who do not have enough food or water have sent their cattle to the slaughterhouse prematurely. The liquidation of supply offered consumers discounts at the supermarket butcher.

Industry observers say this is unsustainable because there are fewer cows and fewer replacement heifers to produce cows. The long-term implication is that the market will experience tighter supplies.

“Fewer calves in 2022 and 2023 means there will be fewer cattle and ultimately less beef in 2024 and 2025,” Lusk said. wrote. “[T]decisions are made today selling cows and heifers will affect retail beef prices two to four years ago.”

Simply put, droughts and high feed prices in today’s economic landscape will reduce the supply of beef to the US market for years to come.

During second quarter earnings callThe Texas Roadhouse restaurant chain acknowledged some relief from escalating beef prices, but warned that pressure is expected in the fourth quarter.

“We always think commodity inflation is cyclical and commodity costs are cyclical. So while we’re feeling significant inflation right now, that cycle will reverse at some point,” the director said. financial Tonya Robinson: “That philosophy hasn’t changed. It just means we can take it a bit more on the chin during this short-term cycle and rely on customer loyalty and return.”

Can chicken and turkey save the beef?

The latest trend in the food industry is that budget-conscious consumers are switching from beef to chicken. Poultry is generally more affordable than beef, although the price difference may be temporary. Chicken and egg prices climbed 16.6% and 39.8%, respectively, year-over-year.

The national average price for a fresh whole chicken is $1.879 a pound, while a dozen high-grade A eggs cost $3.116, authorities said. Data of the BLS.

The industry was hit by rising consumption and an outbreak of bird flu earlier this year.

Supplies have struggled to keep up with demand. Egg production was down 2% year over year in August (pdf), while chicken production slipped 1.8% year-over-year in July. The positive development, however, is that cases of highly pathogenic avian influenza (HPAI) have declined, according to a new report of the CoBank Knowledge Exchange. But the main concern is that “the risk of another outbreak this fall remains high and the stakes for poultry producers couldn’t be higher”.

Some restaurants are incorporating more chicken into their menus. It has been estimated that chicken now makes up 60% of Chipotle’s entrees and represents less than 20% of its food costs. Others, including wing stopare turning to chicken thighs or darker poultry meat because these items are less expensive than breasts and tenders.

“Turkey prices are currently at record highs, resulting from the combination of tighter supply caused by HPAI, higher demand, inflation and increased demand on food systems. Americans,” the band wrote. “Although there should be enough turkeys for Thanksgiving, the pressure will keep prices high with lower forecast supplies and higher demand for 2023.”

Andrew Moran covers business, economics and finance. He was a writer and journalist for over a decade in Toronto, with bylines on Liberty Nation, Digital Journal and Career Addict. He is also the author of “The War on Cash”.