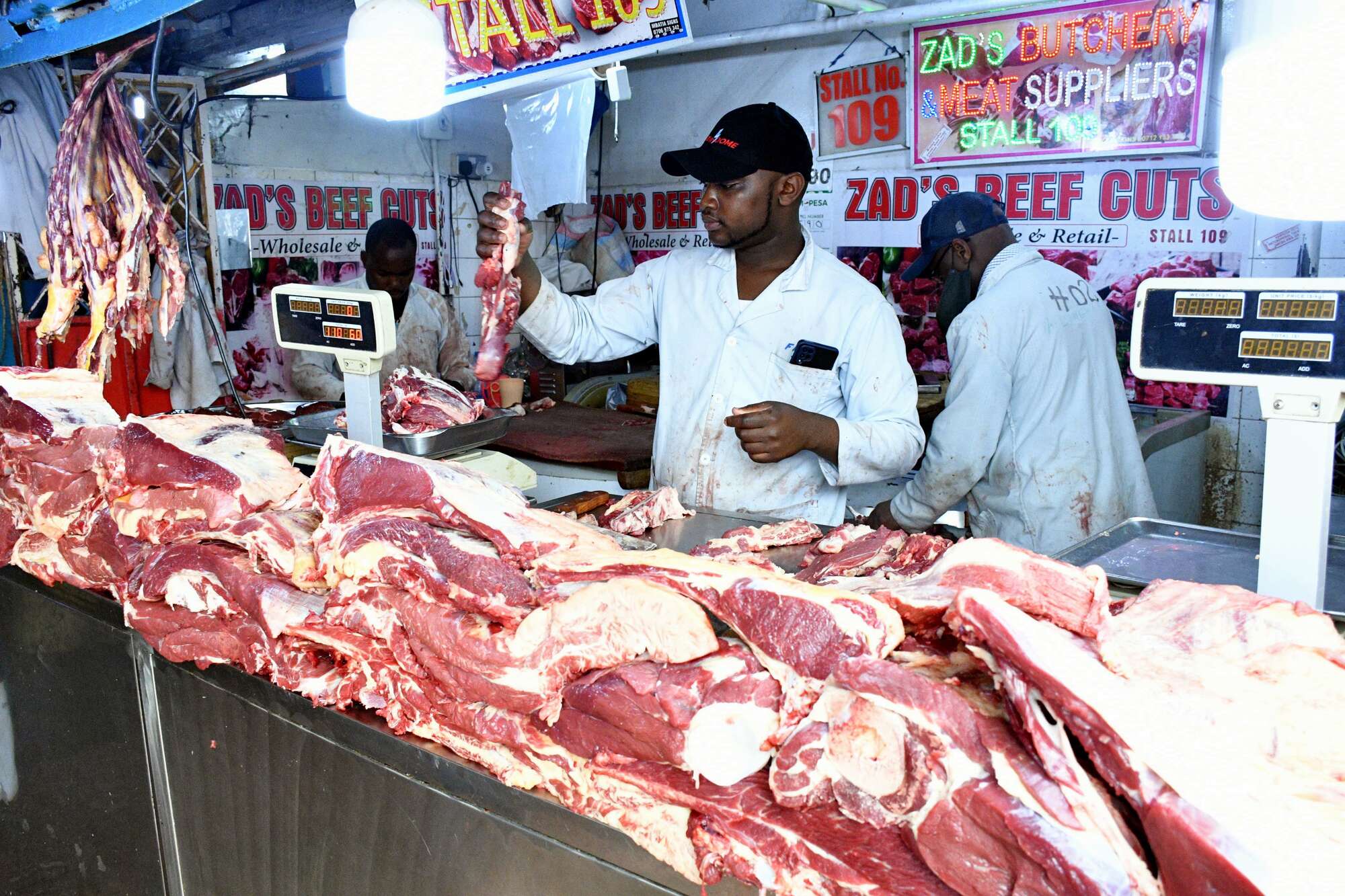 Meat is on the shopping lists of most middle-class households in Kenya. And in recent years, most families with disposable income consume it about three times a week.

A Kenya Market Trust survey shows that the average Kenyan consumes about 15 kilograms per year.

Among the different types of meat, beef is the most popular in Kenya, due to its relatively affordable price and availability. Beef is alternated with other meats such as chicken, goat, mutton, fish and pork, which are slightly more expensive.

Curiously, beef and veal (veal) are now more expensive than other meats – and chicken in particular – in many butcher shops across the country.

Spot check by the business daily shows that beef prices at butchers, including supermarket butchers in Nairobi, have exceeded the price of chicken which has traditionally been more expensive.

In the Moi Avenue branch of the Naivas supermarket, for example, chicken of various brands sells for between 500 and 800 shillings, with beef costing much more.

On their online store, Kenya Meat Processors sells a kilo of boneless beef at Sh700, while bone-in beef sells for a little cheaper at Sh600. In this shop, chicken sells for Sh600 per kilo, with kienyeji (indigenous breeds) chicken, considered tastier, selling for 700, the same as beef.

In Carrefour supermarkets, a kilo of bone cube, which the majority of Kenyan consumers buy, sells for 649 shillings while a kilo of chicken costs 539 shillings. Only a kilo of drumsticks is more expensive than beef at Sh779.

At the Nairobi city market, a kilo of beef steak sells for 650 shillings while broiler chicken sells for 450 shillings. Most meat shops here sell kienyeji chicken at Sh650, cheaper than sirloin at Sh850.

”It has become difficult to get good quality beef. Many butcher shops here have stopped selling meat from Burma due to its poor quality,” says Alphonce Mwangi, a market butcher, noting that this has put a strain on supplies.

City Market gets most of its beef from the Kenya Meat Commission (KMC) in Athi River and the Dagoretti slaughterhouse. KMC is also setting up a butcher shop in the market.

”Our customers are particularly concerned about quality. To keep them, you have to ensure the quality by sourcing from specific suppliers,” he adds.

Chicken, he says, now moves faster than beef, due to the price difference. The income of some families remaining the same, any difference in price, even minimal, disturbs their budget. For these families, chicken is now the protein source of choice.

In butcher shops in most areas of Nairobi, the price of chicken has remained relatively stable even though the price of beef has dropped significantly. Broiler chicken – the cheapest and most popular for most middle-class families – sells for between 450 and 500 shillings per kilo, while beef costs between 600 and 650 shillings depending on location, cut and supply.

Rising beef prices are also being felt in the high-end segment of the market that buys primal cuts. The hardest hit have been top hotels and restaurants that rely on cuts such as flank, loin, brisket, chuck, shank, rump and short plate.

To maintain their profit margins, some hotels have had to adjust the prices of their steaks. According to a source, other restaurants, particularly in Nairobi, have been forced to remove beef from their menu as the shortage has grown.

Yet nowhere is the situation worse than in hotels with chophouses, as says Wayne Walkinshaw, executive chef and head of the Radisson Blu’s meat restaurant in Nairobi.

”Chefs struggle to consistently find good meat products. Some of these products take up to three months to arrive from overseas,” Walkinshaw reveals.

”There may be fewer fits and limited options, but they’re just as good quality.”

Kenyans have taken notice of this price difference, with some on social media worrying about whether Kenya is the only country where chicken is more expensive than beef. In truth, however, meat prices have been rising around the world since 2020, for reasons related to Covid-19.

While the government announced in 2021 a duty exemption for some of these raw materials, minimal effect has been achieved as world market prices remain high.

The latest report from the National Drought Management Authority (NDMA) indicates worsening drought conditions in 19 of Kenya’s 23 arid and semi-arid counties in the fourth consecutive low rainfall season since 2020.

Dr Boniface Kaberia of the Kenya Market Trust says beef in Kenya is one of the most expensive in the world, a situation which has forced consumers to turn to other sources of protein such as fish, chicken and beef. pork.

This is backed up by data from the Food and Agriculture Organization of the United Nations (FAO), which shows that 50 million birds are culled in Kenya every year. The majority of them (about 27 million) are slaughtered either at home or in unlicensed facilities.

Meanwhile, Kenya is experiencing unmet local demand for beef, which stands at 648,000 tonnes against a local production capacity of 300,000 tonnes, according to the Kenya Agriculture and Livestock Research Organization. (KALRO).

Apollo Gichane, Kenchic’s regional manager, says the price of chicken has remained relatively stable in recent months, except in August during the general election.