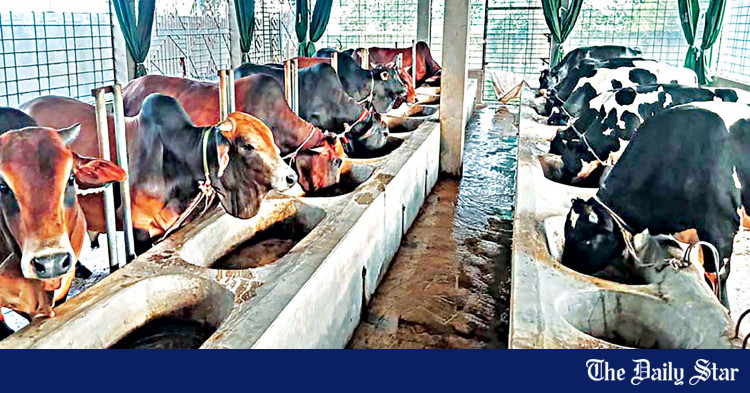 The livestock sector represents 1.9% of the gross domestic product and concerns 20% of the population. Photo: Star/FILE

The livestock sector represents 1.9% of the gross domestic product and concerns 20% of the population. Photo: Star/FILE

Despite continued growth and huge prospects in the livestock sector, bank financing to stimulate investment in agriculture remains low.

Dairy, poultry and other livestock farmers secured 14% of the total Tk 26,500 crore loans disbursed by banks for the agricultural sector in the financial year 2020-21.

For all the latest news, follow the Daily Star’s Google News channel.

The amount of loans granted to marginal farmers by financial institutions is very low. There is also an absence of livestock insurance, said Md Ainul Haque, former Director General of the Department of Livestock Services (DLS) in an article during a seminar organized by Adorsho Pranisheba Ltd at a hotel in the city. yesterday.

He said the livestock sector, which accounts for 1.9% of gross domestic product (GDP) and involves 20% of the population, has been growing, as evidenced by increased meat production and milk.

He said investments in the sector are needed to boost meat and milk production and reduce dependence on imports, create jobs and ensure increased availability of animal protein, namely milk.

More than one lakh tonnes of powdered milk and dairy products are imported every year, costing around Tk 2,000 crore per year, Haque added.

He said that the complexity of procedures and the problems of organizing guarantees by farmers, the risk of infection and mortality of animals and the absence of livestock insurance are major factors affecting the financial inclusion of the sector.

Haque demanded easy and cheap loans for cattle ranchers and secured loans for real farmers. Livestock can be used as collateral instead of land, he said.

At the event, Agriculture Minister Muhammad Abdur Razzaque said real farmers should be provided with collateral-free loans on easy terms.

He said the government had created a window allowing farmers to borrow at an interest rate of 4%.

But farmers are often unable to meet the difficult conditions that exist to obtain loans. This is why the loan process needs to be simplified, he said.

Razzaque said the price of a cow is between Tk 5 lakh and Tk 10 lakh.

He said the cattle should be insured. However, the problem is that people don’t trust insurance companies. They harass and deceive customers extensively. Insurance should be made friendly by ending this harassment and cheating, he said.

He also talked about the recent rise in egg prices and said protein prices will go down. “It’s temporary,” he said.