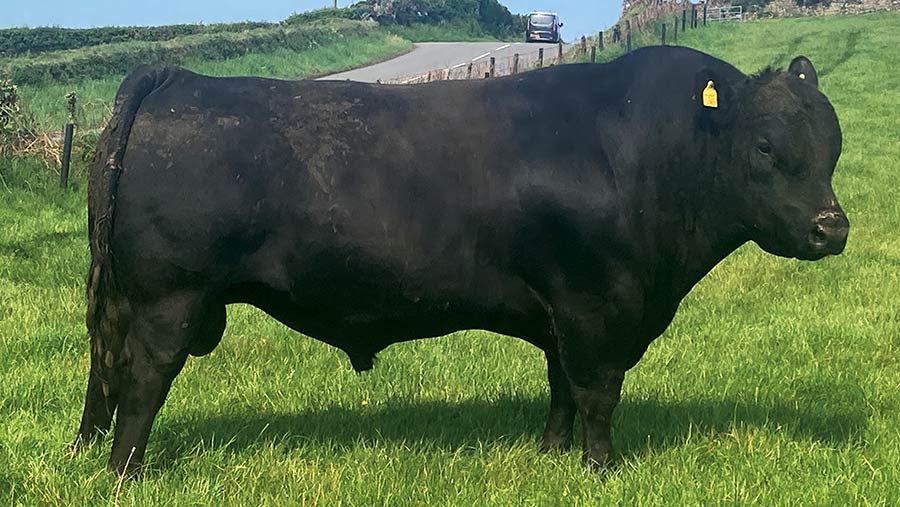 Modeling work by the Stabilizer Cattle Company (SCC) shows that beef cattle farmers can reduce their carbon footprint by 40% with better management and the right genetics.

For Harri Parri, this better management comes down to good herd health and balanced nutrition, enabling him to capture the full potential of his 200 performance-recorded Stabilizer cows.

“It’s 40% health, 40% nutrition and 20% genetics, so for profitable, low-carbon suckler beef, you need health and nutrition as the cornerstone for genetics to thrive,” says Harri, who farms with his wife, Elin, and parents, Richard and Rhian, in Crugeran, Pwllheli.

For Harri, efficiency comes down to a combination of factors.

Since the family switched to stabilizers, they have increased their total weaning weight by having more live calves.

“We have reduced the size of mature cows. When we had crossbred dairy cows they weighed 680 kg, now they weigh around 630-640 kg. A smaller, bigger cow will practically live on fresh air after weaning and in the middle of gestation,” he adds.

“With the stabilizer, we have a cow that lives very cheaply, but will perform very well when you put food in front of her.”

2. Use of Estimated Breeding Values ​​(EBV)

Mature cow weight, fat depth and low birth weight top the list of EBVs he looks for in the herd breeding program.

There are three indices which combine the relevant EBVs to give economic value to an animal – £Weaning for the dam, £Finisher for the terminal side and £Profit which combines the two.

The Parris operate two adjacent farms on the Llŷn Peninsula where they grow 40 ha (100 acres) of barley, oats and fodder beets in a rotation of four or five years.

This reduced the risk to their business as feed prices soared.

Dry cows typically eat 15 kg of dry matter (DM) per head per day and more if given the chance, but if they have the correct body condition score (BCS) they only need 5 to 6 kg of DM to transport them during the winter, says Mr. Parry. Although he adds that the cow must be in good condition at the time of weaning to achieve this.

“If the cows are fat, the calves will have done well too, that extra flesh on their backs is our winter hay barn or our silage pit,” says Mr Parri.

“We feed the cows well during the summer and the Stabilizer genetics also play a part – they are EBV fat positive and are bred to thrive on grazed grass.”

Midway through gestation, when the cows are dry, Mr. Parri aims for a BCS of 4 to allow the cows to lose some condition and drop to 3 or 2.5. For breeding heifers, they aim for a daily live weight gain (DLWG) of 0.5 kg at housing.

“When we take the heifers out in the spring, they will be grazing on quality grass, so there is no need to overfeed them over the winter to keep them growing at 1kg a day – the grass will bring them to weight and litter. desired state up to and during bubbling.

Indeed, at the output, the heifers can grow by 2 kg per day.

“Our approach means we have a slightly higher void ratio in heifers than we would like – we are running at 85% calving after six weeks, but this actually increases the overall fertility of the herd as the less fertile animals are discovered as heifers,” he said. Explain.

Meanwhile, improvement is seen later, with cows reaching a pregnancy rate of 96-98% after a nine-week bull period.

Most arable crops were grown without bagged nitrogen this year – only a small acreage that was planted late in May had a dressing to get it started.

Instead, they used poultry manure from their free-range hens.

“We have halved our volume of purchased fertilizer by better managing farmyard manure and chicken manure, but unfortunately [fertiliser] costs even more than the total purchased last year.

Their mixed farming philosophy is also good for building soil resilience and they achieve yields of 7.4 t/ha (3 t/acre) for barley.

Since last year, cows have also been vaccinated against rotavirus, following a serious outbreak of E coli.

“We lost a lot of calves and the performance of animals that were infected but survived was also affected.”

Calves are also vaccinated against Clostridial diseases and pneumonia.

The heifers are fed a store ration during their first winter, but the bulls continue to grow steadily at 3 lbs per day.

Once all numbers are recorded and EBVs are updated to approximately 11-12 months, the final cut of breeding bulls is selected. They are then turned into silage only, to help prepare for a grass-fed summer.

“We are increasing the concentrate levels in the feed of culled bulls with a 15-month slaughter target at 350-370 kg deadweight at the R-U4L grades,” says Parri.

Fertility is one of the most important traits, but calving ease and low birth weight play a part in it.

Between 75-80% of calves in the herd in the first three weeks compared to the UK average of 60% suckler cattle; 90% calve in the first six weeks.

“We tare 160 in the summer in nine weeks and 110 in the fall in seven weeks, so the first calving block starts in mid-March and the second in late June.”

The voids are fattened for sale and the surplus pregnant heifers are also sold.

Spring calves are weaned at six months in early October and summer calves at five months.

“The actual weaning efficiency is just over 40%, which is not ideal, but our breeding program is mother-led with the cows carrying that hay barn on their backs – we could very easily increase this number by introducing more growing terminal lines.

“We are very concerned about losing growth due to the emphasis on the mother in the herd, but we are trying to push the boundaries to see how far we can go with the weight/size of mature cows without compromising performance and while respecting the specifications of the carcass. »